Dr Detty Nurdiati reflects on the past, present and future work of Cochrane in Indonesia 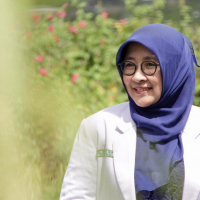 There’s a certain symmetry in the founding stories of Cochrane Indonesia and the global Cochrane network itself. The origins of both lie in the shared work of extraordinary people who place evidence at the centre of better health and care, especially for mothers and their babies. Here, Cochrane Indonesia’s Director Dr Detty Nurdiati reflects on her continued contributions to maternal and perinatal health and the work of Cochrane.

Despite rising prosperity, over 40 women die in childbirth every day in Indonesia. It’s an intractable national health statistic that represents loss and suffering on a scale that Dr Detty Nurdiati has long been determined to change. Her many endeavours in research, teaching and patient care over three decades give clear expression to what is a deep personal and professional commitment to maternal and child health.

‘I know my dream is very big,’ Detty says. ‘But for me, work in this area is what you might call very addictive. The more you learn, the more you work and the more you love it.’ This is evident in Detty’s many clinical and academic roles, and her extensive contributions to many organisations. As well as caring for mothers at her private obstetrics practice, she does the rounds at Yogyakarta’s Dr Sardjito Hospital, heads the Department of Obstetrics and Gynaecology at Universitas Gadjah Mada, and provides training to clinicians, midwives and other health workers.

In recent years, Detty pioneered Indonesia’s first health and social care program for victims of domestic violence, based at Yogyakarta’s Dr Sardjito Hospital. ‘This is work we began with tear drops in our eyes,’ Detty explains. ‘It’s hard and tough, but I love this work and am happy our program has now become a model for others. We have a hidden shelter for the women and children; and clinicians, social workers, psychologists and NGOs work together to provide real help to these victims of violence. We have become a model for other hospitals who are now setting up similar programs.’

Detty’s role in establishing this program is characteristically bold. As a young doctor, Detty made the big decision to study for her PhD in Europe. ‘It was definitely a culture shock for me, but also a bit of a surprise for people in Sweden too!’ she laughs. ‘I was a mother of five children who wore a hijab who came all the way from Indonesia to study abroad for five years – that was seen as very unusual in the early 1990s. But everyone was so kind and helpful to me. During those years I was excited to read of Iain Chalmers’ work in effective care in pregnancy and childbirth, and had the chance to visit Oxford where I met many people involved with the beginnings of Cochrane. So it’s no coincidence that my love for evidence-based medicine (EBM) grew bigger and bigger.’

Detty returned to Indonesia and was instrumental in integrating EBM into the curriculum at Faculty of Medicine UGM as part of an ambitious agenda to help both individuals and institutions contribute to better knowledge, health and practice. This has since spread to include midwives, physiotherapists, librarians and other health workers. ‘I see so many midwives who are eager to learn. They want to both use evidence and contribute to the evidence base. Often in Indonesia we don’t have access to the equipment or medicine we need, and this is the art of EBM here – gathering and adapting evidence so it is relevant and useful to our circumstances.’

Recognising the importance of generating local evidence, Detty and her team joined two major international collaborative projects that represent Cochrane’s beginnings in Indonesia - SEA-ORCHID and SEA-URCHIN. ‘These two projects, focusing on care during childbirth and preventing neonatal infection, gave us the chance to build our capacity not only as users of evidence, but as producers and providers of evidence. We built up a network of researchers and teachers of evidence-based health care across Indonesia, Philippines, Malaysia and Thailand.’

More recently, Detty was part of the expert working group providing evidence synthesis advice to inform the Evidence Summit on Reducing Maternal and Neonatal Mortality in Indonesia, convened by the Ministry of Health and the Indonesian Academy of Sciences. ‘The Summit was really a challenge for us in terms of gathering and analysing our own national evidence according to systematic review methods. It’s clear that we need to teach people here how to produce and provide high quality evidence that we can use to inform policy and practice.’

‘The good news is Cochrane Indonesia will now have greater capacity for training and a more visible platform to advocate for increasing the capacity within Indonesia to conduct and use systematic reviews. We now have the opportunity to provide technical expertise and advice to the Ministry of Health and focus on knowledge translation in our region. The translation of Cochrane findings into Bahasa will be a key part of this. Given we have a population of 260 million people, the majority of whom don’t speak English, this is very important.’

‘Ultimately we are looking forward to making greater progress producing evidence for daily practice and policy in our country, the way we have seen many other Cochrane colleagues doing around the world since the organisation first began.’

When asked about the source of the endless energy and enthusiasm needed to realise these big aims and ambitions, Detty answers without hesitation. ‘I have so much motivation from within myself and my family,’ she says. ‘You might say I have hidden memories of being a young mother myself, breastfeeding babies and caring for small children. I have memories of attending the deliveries of all my grandchildren and in my work each day now I am seeing healthy mothers and healthy babies. All this makes me happy. It makes me more and more powerful in my work.’